On 23 March 2018 in Kassel (DE) the DERlab Association held its General Assembly and Celebration marking the Association’s 10th year of strong presence in the smart grids and DER domain.

“Having started out from the European IRED Project Cluster for the Integration of Renewable Energies and Distributed Generation as a Network of Excellence, DERlab grew into an association of leading research institutes and companies worldwide in the field of distributed energy resources equipment and systems in 2008, expanding to 32 members to date.”, Dr. Philipp Strauss, the initiator of DERlab and deputy director of Fraunhofer IEE, states at the anniversary in Kassel. He adds: “The main function of the association has not changed: it is supporting the international harmonisation of the behavior of grid connected distributed power units by facilitating international discussion of new technology trends. Yesterday we held workshops on the future role of power electronic converters to improve the power systems stability by providing power reserves instantaneously and to facilitate added grid flexibility through LVDC systems. DERlab members are especially interested in establishing effective ways to test such new functions in order to support the provision of reliable grid services and enhanced grid security.”

The gathering acknowledged the achievements of the DERlab network and the profound collective value the member network adds to the grid integration domain. The Spokesperson of the DERlab Association and co-director of InstEE at the University of Strathclyde Prof. Graeme Burt remarked: “As we reflect on the last ten years, we can see many examples of our collective effort providing valuable input to consultations, pre-standardisation and standards developments, DER technology advances, and new systems-level validation techniques.”. He continued, “The strength realised through the association’s international cooperation continues to be very relevant to the transformation of the energy sector, and is set to become even more pertinent in the years ahead as the digitalisation, decentralisation and decarbonisation agenda is deployed. So while we grew from a Network of Excellence ten years ago, the association is set to continue to contribute to the excellence of our respective infrastructures and RD&D teams and thus the new sectoral challenges presenting for the next ten years.” 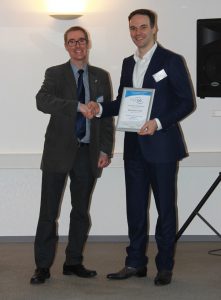 This year’s DERlab gathering signified admission of a renowned stakeholder in the grid integration scene to the DERlab Association. RWTH Aachen joined the ranks of DERlab members complementing the network’s scientific profile with its expertise in ICT, grid dynamics, and power system control and automation. Collaboration between members, consolidation and integration of the member knowledge and expertise base will continue to be the focus of the DERlab Association in the years to come. Just as throughout its first ten years of operation, DERlab will remain committed to implementing the members’ collective expertise towards integration of renewable and distributed energy resources.

﻿
In case you want to change your privacy settings (e.g. issue consent or revoke an already issued consent) please click on the button below. Settings